You are here: Home / City living affects your brain

Researchers found that the regions of brain that regulate emotion and anxiety are overactive in city-dwellers. 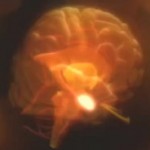 The brains of people living in cities operate differently from those in rural areas, according to a brain-scanning study.

Scientists found that two regions, involved in the regulation of emotion and anxiety, become overactive in city-dwellers when they are stressed and argue that the differences could account for the increased rates of mental health problems seen in urban areas.

In addition, the incidence of schizophrenia is twice as high in those born and brought up in cities.

In the new study, Professor Andreas Meyer-Lindenberg of the University of Heidelberg in Germany scanned the brains of more than 50 healthy volunteers, who lived in a range of locations from rural areas to large cities, while they were engaged in difficult mental arithmetic tasks.

The experiments were designed to make the groups of volunteers feel anxious about their performance.

The results, published in Nature, showed that the amygdala of participants who currently live in cities was over-active during stressful situations.

“We know what the amygdala does; it’s the danger-sensor of the brain and is therefore linked to anxiety and depression,” said Meyer-Lindenberg.